Christian Eriksen is confident Tottenham can qualify for the Champions League this season, one way or another.

Life at White Hart Lane has been tumultuous over recent years, thanks largely to the club’s desperation to make a return to the continent’s premier competition.

It is more than three-and-a-half years since they last competed in the Champions League, but Mauricio Pochettino does not appear to be under the same pressure as others at the helm in recent years.

As such, this is seen by many as a transitional season in north London, albeit one which still offers a decent opportunity to return to the Champions League given their traditional rivals are struggling.

“We are just two points off the top four and two or three wins in a row then you know [you are up there],” Tottenham playmaker Eriksen said.

“Hopefully we will continue what we started on Sunday [at Hull] and on Sunday [against Everton] have a good win also.

“When you see the teams who should normally be in the top six nowhere near, you realise everything can change and that the league is ever so tight with a lot of points to play for.”

A top-four finish is not the only way Spurs can secure Champions League football this season as, for the first time, the winner of this season’s Europa League will earn place.

It is a competition Tottenham will reach the knockout stages of should they beat Partizan Belgrade on Thursday – the only thing Eriksen and his team-mates are focusing on right now.

“[The possibility of Champions League qualification] does [make the Europa League feel more important] when you are there,” he said. “Right now, it is just about qualifying a bit and getting to the next game.

“It depends where you are in the league – if you are higher up you probably put more focus on something else. The route is a bit shorter but a bit more difficult maybe.”

If this season is to end successfully for the north Londoners, Eriksen will no doubt be key to that.

Just a month after being criticised by Denmark coach Morten Olsen, the 22-year-old is beginning to show flashes of the quality he showed in his first season at White Hart Lane.

Eriksen has since cleared the air with his national team manager and is enjoying working at club level under Pochettino.

He admits there are still times when it “doesn’t connect at all” under the former Southampton manager, but things are on the up in his opinion.

“There have been a lot of changes,” Eriksen said. “A lot of things have happened, of course. I hope for the club things will change.

“It’s going the right way. When you fire a manager to get a new one it’s difficult and takes time – but we are on the right way.” 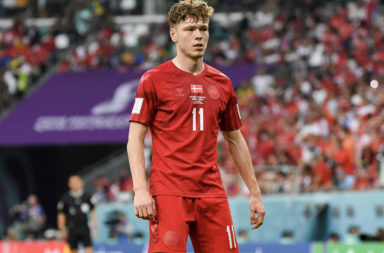