Harry Kane is looking forward to facing Giorgio Chiellini and “one of the best defences in the world” when Tottenham face Juventus in Tuesday’s Champions League Round of 16 tie in Turin.

Harry scored his 23rd Premier League goal of the season in Saturday’s 1-0 win over Arsenal at Wembley, however he admits he struggled when he faced Chiellini and Italy on his first England start at the Juventus Stadium in March 2015.Chiellini left Kane on the floor within the first two minutes of the game with a robust challenge, and was an ineffective figure up front against the Azzurri that night.

“Chiellini is an amazing defender. Five minutes into my first start for England he made a very tough challenge. It was a nice welcome to international football!” Kane told a pre-match news conference ahead of the game in Turin.
They have yet to concede a goal in seven matches in 2018, however Kane is hopeful that Spurs can prevail against the Italian champions.

“Juve are a fantastic team but I’m looking forward to the challenge. I always say that I want to test myself against the best defences in the world and this is certainly one of those,” the 24-year-old continued.Not many people expected us to get through from the group stage but we won the group instead, so we must be confident against Juventus.”

Chiellini in turn says Tottenham “are lucky to have Kane”, who has netted eight goals in his last seven appearances and 32 goals in all competitions this season, four more than any other player in Europe’s big five leagues. 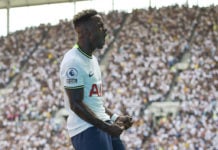