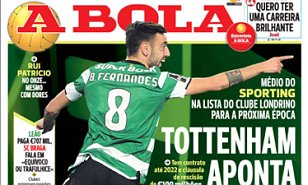 According to The Daily Mail Mauricio Pochettino is eyeing up a summer swoop for Sporting midfielder Bruno Fernandes however we will have to part with £87million to bring him to the Premier League.

Portuguese news outlet A Bola says we are in the market for another midfielder and Mauricio Pochettino is reportedly keen on bringing the 23-year-old to North London before the start of next season.

He has impressed in both the league and in the Champions League for Sorting and the article adds that he continues to attract interest from a host of top European clubs.

The article adds that the former Udinese and Sampdoria man could cost the eye-watering figure after recently signing a five-year-deal with Sporting last summer and that Daniel Levy will be looking to negotiate the midfielder’s pricey release clause, if the club decided to pursue him in the summer transfer window.

It’s also not the first time Spurs have signed a midfielder Sporting after securing the services of Eric Dier back in 2014. Dier made the move and has become a mainstay in Pochettino’s squad ever since.

Video: Spurs players arrive at Goodison ahead of Everton tie

The reason why Gareth Bale was not in the Spurs squad...