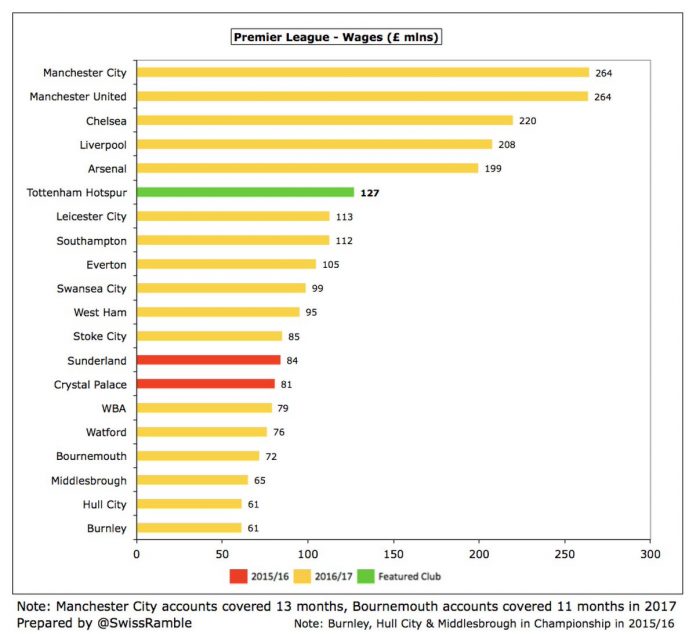 According to ESPN Spurs spent significantly less on wages than the rest of the Premier League top six last season, with an amount spent being closer Burnley’s than Arsenal’s

Although our wage bill rose to £127 million for the year ending June 30, 2017, up from £100m in the previous year, it was still significantly lower than Arsenal’s £199m and less than half that of Manchester United (£264m), who had the highest in the Premier League.

The article adds that Burnley, who were promoted in the 2015-16 season, had the lowest wage bill in the Premier League last season at £61m with Spurs spending £66m more than Burnley, but £72m less than Arsenal.

Our &27m rise followed a plethora of new long-term contracts for the majority of the first-team squad, including Harry Kane, Dele Alli and Christian Eriksen, while chairman Daniel Levy’s pay rose from £2.8m in 2015-16 to £6m last season due to bonuses and a remuneration committee review.

Unsurprisingly Manchester City and Manchester United lead the way (£264m) with last season’s champions Chelsea having a total bill of £220m, while Liverpool’s was £208m.

Spurs’ rigid wage structure and the club’s hardball stance has led to a breakdown in contract talks with centre-half Toby Alderweireld over his demands for a long-term contract worth more than £160,000-a-week with our best-paid player being Harry Kane, who earns roughly £100,000-a-week with significant performance-related bonuses worth up to an additional £50,000-per-week.

Report: Spurs are ‘laying the groundwork’ to sign 26-year-old in the summer

Report: Spurs front-runners to sign player for just £4m in the summer

Tottenham star reveals on social media that he is back from...