Home Media (Gallery) 22 new images of how work is progressing at the new...
0
SHARES
ShareTweet

A short visit to the new stadium to see the demolition of the fixed cranes. 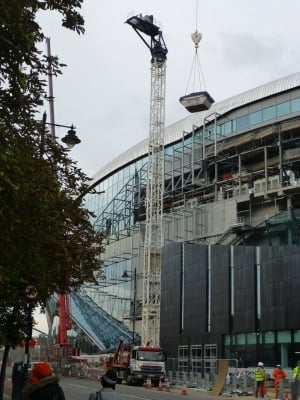 It’s fair to say that the majority of Spurs fans were frustrated when the news broke of the fact that the stadium would be delayed. Saturday’s Premier League game against Liverpool was originally penciled in to be the official curtain opener, but we all know what has happened since then.

Despite all the headlines, Stadium MK stuff and re-arranged dates, work continues around the clock on the construction of the 62,062 seater stadium.

Yesterday, fellow Spurs fan @VocalSpurs paid a visit to N17 to take some photos of how the exterior of the stadium is progressing and to capture the dismantling of one of the giant cranes.

As you will see from the photos, work is certainly progressing at pace. However, there is no official date set in stone for a re-arranged opening. Firstly the club must re-arrange the test events which were scheduled to be an Under-23 match and a legends fixture against Bayern Munich.

Report: Club have made ‘great progress’ on deal to sign Spurs defender

Ex-Spurs man backs current midfielder and states he should not be...

Ex-Arsenal man claims Spurs are lucky to have Charlie Kane as...