Tottenham Hotspur have revealed that the first batch of seats have been installed within the new Spurs stadium.

The beautiful blue seats (I never thought I would get so excited at seeing a stadium seat) have been placed in some of the upper sections of the south and east stands and boast more space and legroom compared to our beloved White Hart Lane – some will say, so they should considering the price of season tickets.

The 62,000 seater capacity stadium is set to open in time for the new Premier League season, although some expect Tottenham to ask the Premier League to play their first few matches of next season away from home in order to complete the project.

Earlier today, we brought you a video update of the construction of the new stadium which you can see by clicking here. 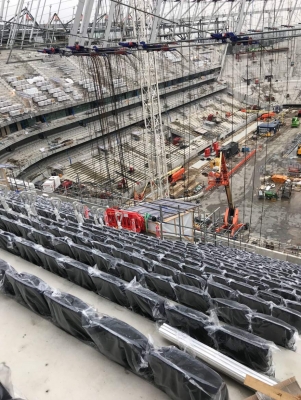