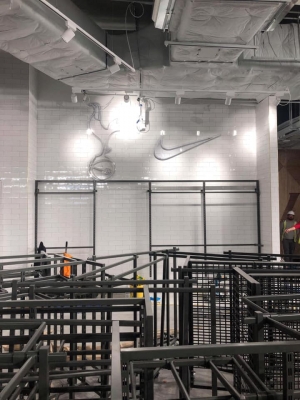 Tottenham look to be nearing the completion of their new state of the art stadium and wow does it look impressive.

The latest photos out of the stadium site are simply mesmerising, with the plenty of work being undertaken recently including the installation of the grass playing surface and the testing of the goal posts at the south end of the pitch.

For the first time since building began, the stadium looks ready for people to walk in and take their seats. Surely an opening date can’t be far away.

And it isn’t only the stadium nearing completion, but the Tottenham Hotspur club shop is also nearing its final stages.

The Spurs badge can be seen in white on the back wall next to the Nike logo, which represents our kit manufacturer. Glorious stone arches can also be seen within the shop walls.

The store will be Europe’s biggest club shop, located next to the Tottenham Experience and the new Tottenham Hotspur Stadium.

I’m sure there will be plenty of people heading down early to check it out once the opening game is finally announced.

Report: Spurs player could remain at club after impressing Conte in training

Report: Serie A club have enquired about Spurs player – Driven by their scout