Home Media Gallery: ‘Leaked’ image emerges of what could be Spurs’ away warm-up shirt

Photos have emerged online this evening of what is claimed to be next season’s away pre-match jersey.

The design which was shown on the Footy Headlines website is based on the same template as the home warm up shirt which is already available for sale on the club’s official web shop.

The alternative version of the t-shirt features the same flash of the lava pink colour which can be seen in some of Nike’s designs across next season’s training range with the Nike and Spurs badge also containing the very distinct colour which has never featured in any of the club’s designs in previous years.

Tottenham’s home and away playing strips are expected to be officially unveiled by the club later this week with reports suggesting that retailers have been given a date of July 31st (Football.London).

Nike signed a 15-year agreement until 2033 with the North London outfit which is said to be worth £30million a year in revenue (The Sun). 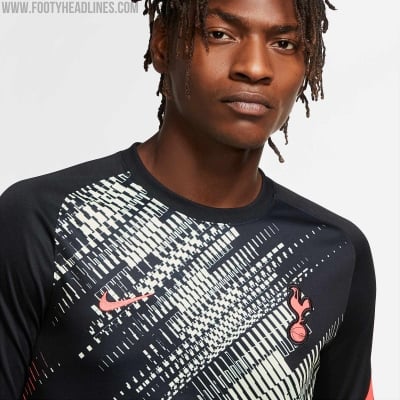