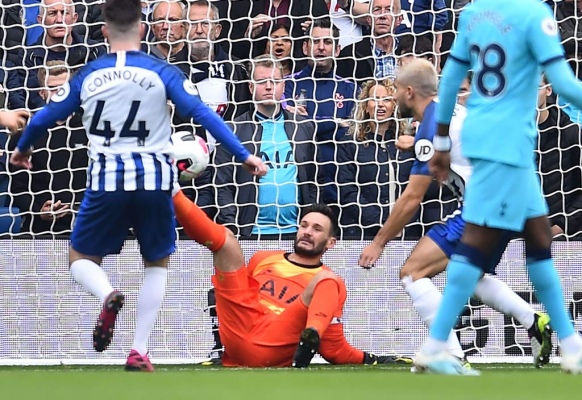 An almost unforgivable error from the club captain at the worst possible moment. Great shot stopper, always dodgy coming out or dealing with crosses, he left the team with a sense that the uphill struggle had become mountainous. He seemed in terrible pain with the injury and all of us can only be sending him our best wishes – he has been an excellent servant for the club.

No one needs anyone like me to point out that this was just about the most abject Spurs performance any of us would be able to recall in a very long time. For heaven’s sake, I found myself longing to be watching the debacle against Bayern Munich – at least Spurs offered something at some point in that game and it was Bayern, not Brighton, a team before today who couldn’t buy a win, let alone score a goal.

Hats off, nevertheless, to Brighton who looked class. Likewise, Bayern. Common factor, Spurs, who allowed them both, no, invited them both, to look so very good.

The ‘no’s for Spurs: no application, no movement, no invention, no idea of how they were supposed to play, no clue. Magnificent, the support throughout, who sang with complete absence of irony about ‘super Tottenham’.

A while back, I suggested that when every player underperforms, the manager is to blame, and that is emphatically the case here. Spurs have performed disastrously for nine months (though the slide can be detected in the year or two before that).

But, right now, something is badly wrong, and no one can dismiss this evidence as yet another bad day at the office. The players have stopped playing … with the system … for the manager? The root causes for all that are for discussion another day. Right now, we know we are entering sacking territory.

Report: Manager has told Everton he can sign Spurs player this...