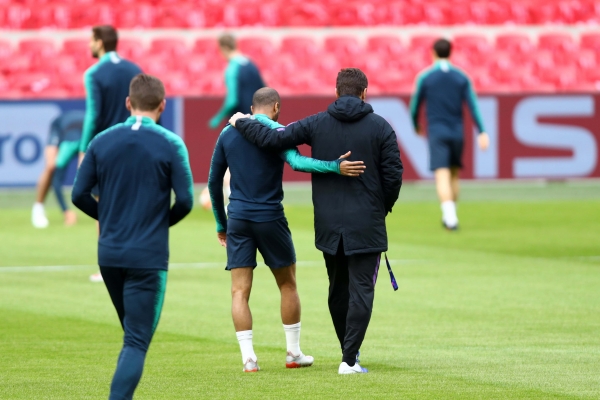 AMSTERDAM, NETHERLANDS - MAY 07: Mauricio Pochettino, Manager of Tottenham Hotspur and Lucas Moura of Tottenham Hotspur embrace each other during a training session ahead of their UEFA Champions League Semi Final second leg match against Ajax at Johan Cruyff Arena on May 07, 2019 in Amsterdam, Netherlands. (Photo by Dean Mouhtaropoulos/Getty Images)

Tomorrow evening, Tottenham Hotspur will play their biggest fixture in a generation when they take on Ajax in the Champions League semi final second leg.

Spurs travelled to Amsterdam earlier today and held a training session at the Johan Cruyff arena a short while ago to prepare for the tie in which they must overturn a 1-0 defeat if they are to progress to the final for the first time in the club’s history.

The Spurs players were photographed participating in the session by the media, who are always invited to watch a section of training as part of Champions League protocol.