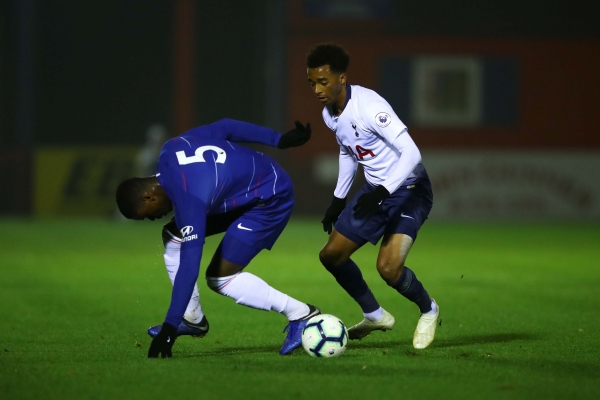 ALDERSHOT, ENGLAND - NOVEMBER 23: Marc Guehi of Chelsea battles for the ball with Tashan Oakley-Boothe of Tottenham Hotspur during the Premier League 2 match between Chelsea and Tottenham Hotspur at EBB Stadium on November 23, 2018 in Aldershot, England. (Photo by Dan Istitene/Getty Images)

It turned out to be a frustrating evening for Wayne Burnett’s side after failing to hold on for a victory.

Tottenham took the lead after 26 minutes of action when Brown latched onto a loose ball, burst in from the left then laid it wide for Roles to curl in from the angle.

Chelsea came back into the game and nearly levelled just before the half only for Hinds to heads away from under the bar to preserve the lead going into the half time break.

Tangana was penalised for handling in the box on 65 minutes but Chelsea saw their penalty saved by Austin.

With just a minute left to play in the game Chelsea finally drew level with a low shot to rob Spurs of a victory.

Report reveals what sources close to Zaniolo have said about potential...