Home Media (Gallery) What information was given to those who attended the new Spurs...
0
SHARES
ShareTweet 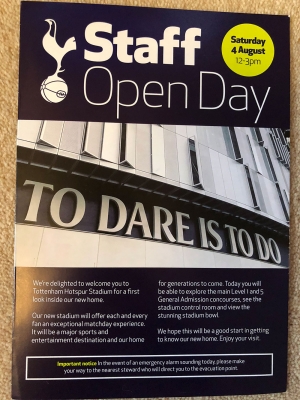 The first test event was held at the new Tottenham Hotspur stadium on Saturday, but what information was given to those who attended?

We have been kindly provided with the guide which was handed out to those who were lucky enough to set foot into the stadium and it makes for interesting reading.

The stadium map highlights some of the catering locations on offer within the ground including The Beavertown Brewery, Chicken House and The Dispensary.

The next test event is scheduled for Sunday 18th August and will again be closed to the general public.

The first test event open to the public will be the Under-23 fixture against Brighton on Monday 27 August at 2pm, the exact same day on which we face Manchester United at Old Trafford in the Premier League.

Opinion: Everything wrong with that disgraceful defeat to Arsenal in the NLD

Tottenham legend claims Nuno is playing star out of position this...

Opinion: Everything wrong with that disgraceful defeat to Arsenal in the...