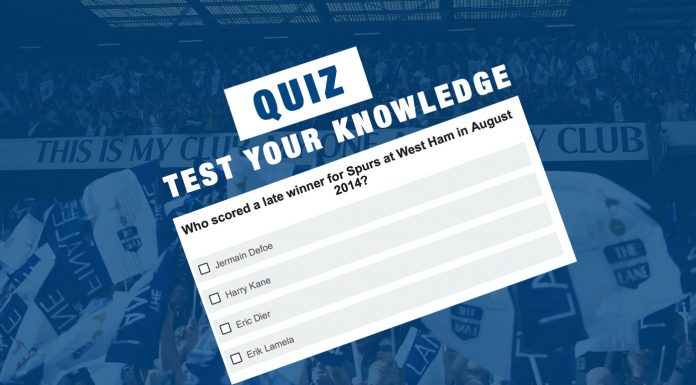 Paul Stalteri scored a famous winner for Spurs at West Ham in 2007, but what was the final score?

Who missed a last-minute penalty for Tottenham against West Ham in a 1-1 draw in 2007?
Darren Bent
Robbie Keane
Dimitar Berbatov
Jermain Defoe

Who scored Tottenham's winner when they dumped West Ham out of the FA Cup in 2001?
Steffen Iversen
Sergei Rebrov
Gary Doherty
S*l Campbell

Which of these Spurs players has scored the most Premier League goals against West Ham?
Harry Kane
Teddy Sheringham
Gareth Bale
Chris Armstrong

Who was the Spurs keeper during the ‘lasagna-gate’ match at West Ham in 2006?
Radek Cerny
Paul Robinson
Neil Sullivan
Kasey Keller

Ahead of the match. we’ve put together a quiz for you to test your knowledge of our previous encounters of the London rivalry.

Mauricio Pochettino’s side have won eight of their last 11 Premier League away games (D1 L2), including four of their five on the road this season.

Let us know what score you get in our quiz by leaving a comment below.

Report: Daniel Levy blocked a 50% sale of Tottenham worth £800m