Tottenham Hotspur and Arsenal could face competition from Serie A giants Juventus this summer in the race to sign Chelsea midfielder Willian.

Italian news outlet Tuttosport claim that while Juventus are keen to land the Brazilian, both North London clubs could hold an advantage over the Old Lady.

The reports suggests that Willian’s family are keen to remain in London which will likely play in favour of the Premier League pair. 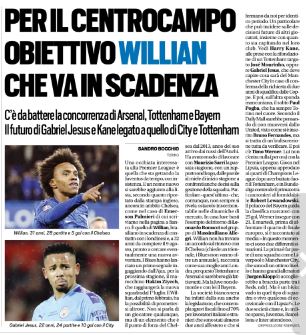 Willian’s future at Stamford Bridge is in doubt with the player and the club yet to agree a new deal to extend his near-seven-year-stay at the club.

The 31-year-old will be available on a free transfer at the end of the current campaign and has been holding out for a three-year contract while Chelsea’s policy is not to offer players over 30 a lengthy deal (Standard).

Willian, who has scored seven goals in 37 appearances for Chelsea across all competitions this term, is also under consideration by Bayern Munich (transfermarkt).

The Daily Star have previously reported that Spurs head coach Jose Mourinho is keen to bring him to the Champions League finalists.

Report: Spurs could make move for player who Paratici took to Juventus

‘Misled about the path’ – Mourinho on past jobs, Spurs exit and Roma passion

‘That’s not helpful’ – Roy Keane suggests Harry Kane could be...

Report: Spurs could make move for player who Paratici took to...

‘That’s not helpful’ – Roy Keane suggests Harry Kane could be...