On August the 8th, I took a trip to N17 (the first time I’ve been back since our Finale match against United). What I saw was amazing! What they have done within four months is truly fantastic work. Granted, contractors have worked 24 hours, seven days a week and there is still a month to go, but I have no doubt that time will wiz by (this was written before yesterday’s stadium delay announcement).

Tottenham have already had a staff test day and a lot of positiveness has come out of it.

As I was driving down White Hart Lane – which I had been doing for decades, I saw the large dome in the skyline before me, and the famous Spurs cranes, that have been part of the ground’s fixtures ever since they started doing work on it. My heart began to flutter the nearer I got to the ground.

When I arrived, I parked in Sainsbury’s car park at about 4.30. Walked out of Sainsbury’s, turned left into Northumberland Park, then to the famous High Road. On the corner,I turned left and started to walk up the High Street. Crossed the road, as there was no footpath on the same side as the ground, it has all been fenced off. I passed the familiar shops on my right, at the same time taking lots of photos and video footage. I went past the school – opposite the ground – where I used to park for many years, now taken over in its entirety by Tottenham Hotspur FC (that is the ground for parking on match days).

Got to the traffic lights at the corner and walked down Park Lane, still taking photos. Turned around, as I couldn’t go up Worcester Avenue from this direction, and walked back.

On the way, I chatted to workmen, who were all impressed with what was developing here. Got back to the traffic lights, crossed the road and turned right. Walked for a few minutes and stood and allowed what was before me to sink in. This was going to be my home until the old heart gives up. I could imagine the atmosphere on match days.

I also looked on in wonderment at Spurs’ new – and the biggest in Europe – superstore. It is going to be incredible (a bit behind schedule, but should be with us by the end of August). Next to that is the old Dispensary, that will house the Spurs history museum. Then I carried on until I faced the entrance to the stadium. An amazing glass structure.

I tried to imagine where I would sit (I will be in the West Stand, leftish as I looked towards the glass front, before me). I imagined walking through those main doors, if, of course, that was my entrance.

Many people came up to me while I was taking photos/ filming and said “amazing” or such words and couldn’t wait, themselves, for it to finish.

After standing still for about 15 minutes, being mesmerised, I made my way back to Northumberland Park, past Sainsbury’s and turned left into Worcester Avenue and walked down as far as I was allowed and again was captivated on what towered over me.

I just can’t wait until I finally get to the ground on the opening day. The atmosphere will be fantastic and the game will be something special. The Finale day was something special last season, with a win that put the icing on the cake. The opening should give us that and much more.

When I went to Newcastle on Saturday, I talked to a lot of Newcastle supporters. We talked about their ground and our ground and they were all impressed with what we were building. Envious even.

This new stadium of ours will bring us into the 21stcentury of a new dawn of Premier football. Granted, we will have to pay off the debt, but I have no doubt that our stadium and the surrounding purchases’ – by the club– will contribute to us challenging on equal terms with the top clubs in the world.

I left, sadly, Sainsbury’s/ Tottenham and made my way to Goodmayes (near Stratford) to stay with my girlfriend for a few days (celebrating my birthday the following day). I felt that I had the most significant birthday present anybody could give me, a visit to our new home and the thoughts on what this could bring and we could achieve.

What more can one say, other than, bring it on. It is magic, you know it! 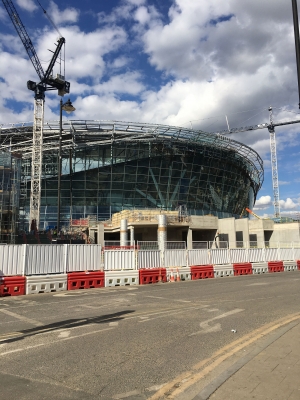