Most football clubs globally not only have home and away kits, but also have choice third kits. Its main purpose is to obviously prevent a clash in kits with the opposing team.

Not only this, but clubs are able to generate more income if they produce three kits for fans to choose from.

Often the third kit is a whacky design that does not necessarily reflect the club’s traditional colours.

Tottenham have certainly released some fantastic third kits over the years. It is likely that the 2019/20 rendition of Tottenham’s third kit will be released within the next few weeks, so with that being said, we look at the top five best Tottenham third kits (in our opinion) from the last 10 years from the 09/10 season to the 2018/19 season. 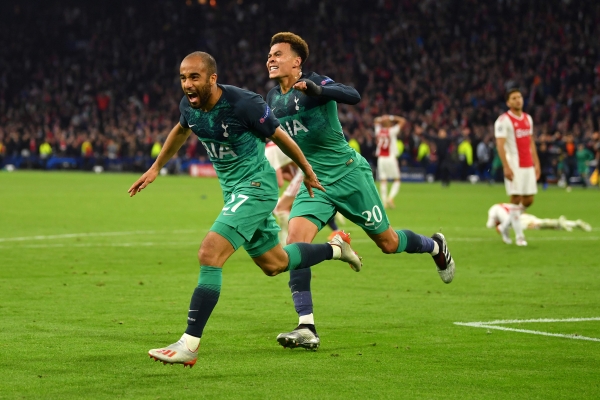 For many Spurs fans, the first thing that comes to mind when seeing Tottenham’s 2018/19 third kit is Lucas Moura. Who could ever forget his second half hattrick against Ajax in the Champions League semi finals that sent Spurs into the final against Liverpool?

The same kit was also used during the clash against Manchester City at the Etihad Stadium in the quarter final second leg. Perhaps these two occasions are what makes this kit even more special.

The kit itself drew inspiration from the club’s locality in Haringey, with the upper half of the kit featuring a birds-eye-view of the area. The upper half of the shirt is of a darker tone and separates itself from the rest of a kit – a reference to the iconic kits used by the club in the 1985/86, 1986/87, and 1991/92 seasons.

A kit that not only pays respect to the rich history of the club but also the locality that has laid the foundations for the club certainly is deserving of a spot in this list.

Report: Spurs officials travel to Turin to meet with Italian ahead of trip back to London

Report: The only type of deal which could persuade Daniel Levy to sell Harry Kane

Report: Manager stalling on job offer in hope that Spurs could come calling

Quotes from 2019 Fabio Paratici interview shed light on how he...

Report: Spurs officials travel to Turin to meet with Italian ahead...

Report: The only type of deal which could persuade Daniel Levy...