Sporting Lisbon president Frederico Varandas has claimed that he was happy with his decision to have rejected an offer from Tottenham Hotspur for Bruno Fernandes.

Varandas sat down in an interview with Portuguese newspaper Record with the focus of the conversation centered around transfer dealings.

Tottenham were said to be the only club during the summer transfer window to have made a serious approach for the midfielder and despite the fact that Spurs were willing to match Fernandes’ €65million (£58.5m) asking price, Varandas was not ready to accept their offer as it included €20m in add-ons (Sporting’s official website).

Instead, the 25-year-old, who scored 32 goals in 53 appearances for his club last season remained at Sporting for the start of the new campaign (transfermarkt).

After another prolific start with 15 goals in 29 appearances (transfermarkt), he was snapped up by Manchester United towards the end of the January transfer window.

Varandas revealed in his interview that Sporting needed to raise at least €115m in sales for the club to survive financially with the sale of Fernandes proving to be pivotal in helping the Primeira Liga outfit to modernise their approach behind the scenes. 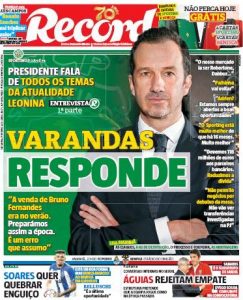 “At the end of June, we had become aware that we were going to sell Bruno. We had already signed Camacho, Rosier and Vietto and we wanted to bring in a striker and a midfielder who were practically closed. The last four days of this market were the worst of my presidency, that’s when I realised that we didn’t sell Bruno Fernandes,” Frederico Varandas told Record.

Fernandes’ previous contract at sporting included a clause that meant Bruno and his agent Miguel Pinho were entitled to a payment of €5m should the Lisbon club receive a formal offer equal to or greater than €35m, a clause which the Sporting chief regrets having been made public.

He added: “Bruno’s sale was very conditioned by his return. If Sporting refused a bid of €35m, we would have to give his agent €5m. This clause was made public irresponsibly. It was one of the things that seriously penalised us. And it was only in this window that Sporting took that weight off our shoulders, to go and negotiate, and I apologise for the expression, practically always with the pants in hand.

“There are no non-negotiable players. Bruno Fernandes is the proof. And it was an obligation. We wouldn’t be able to reach €115m without him. With the sale in January, for €63m practically certain, it was shown that we did well to resist and not to accept the proposal of Tottenham.”

“We had a cash flow requirement of €115m. Bruno was the key to this. Obviously, it isn’t everything. We will complete the investment in the academy. We encountered a very serious structural problem. We arrived and had obsolete operational infrastructures, the result of a lack of vision and investment in the last ten years. We promise and we want to do the digital transformation of the club. Sporting didn’t even have an integrated management software, suited to their reality. Each department worked separately on Excel sheets. Anyone who joined Sporting ten years ago, in September 2018 saw everything the same.”