Home News Exclusive: Pascal Chimbonda reveals what he has loved about Oliver Skipp this...
23
SHARES
ShareTweet

Former Tottenham Hotspur defender, Pascal Chimbonda has claimed that Oliver Skipp deserves to be in the Tottenham starting XI week-in-week-out at the moment (Exclusive interview conducted over Instagram).

The Spurs academy graduate has filtered seamlessly into the first-team under Nuno Espirito Santo this season, fresh off the back of a title-winning campaign on loan at Norwich City.

Skipp played 45 out of 46 league games for the Canaries last time out as they won promotion back to the Premier League. This year, he already has over 770 minutes of football in all competitions for Tottenham.

Chimbonda revealed that he has been impressed with the hunger Skipp has shown on the pitch when given a chance to impress by Nuno.

He said: “Oliver Skipp has started the season really well, that’s why he deserves to be in the starting XI. He should be starting most games because he has shown how hungry he is on the pitch when he has got the chance.”

When asked whether Skipp could be a future Tottenham captain, the former Premier League star claimed it was on the cards, although it was too early to make guarantees.

What Chimbonda did say was that Skipp has the qualities needed to be a captain as he can bring players up to his level and drive his teammates forward.

Chimbonda added: “He could be a future captain but it’s too early to say.

“He can make everyone be at the same level as him and that is something a captain does. He can drive his teammates and make sure that everyone follows.”

I could not agree with Pascal more. It is too early to make silly claims about Skipp playing for England and being a club captain, but his performances have certainly been worth praise and he has all the attributes needed to be a fantastic player. 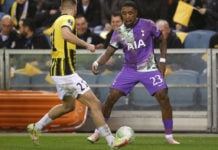 Video: Spurs players arrive at the GelreDome ahead of Vitesse clash

Line Up: Vitesse vs Tottenham Hotspur

‘No vision’ – Some fans react to Spurs’ first-half performance against...

Video: Spurs players arrive at the GelreDome ahead of Vitesse clash

‘Pacos away flashbacks’ – Some fans react to the Spurs team...

Line Up: Vitesse vs Tottenham Hotspur

‘No vision’ – Some fans react to Spurs’ first-half performance against...