Former Tottenham Hotspur academy starlet, Joe Pritchard has joked that Harry Winks would be a great addition for Accrington Stanley considering that he is not starting every week at the moment.

Winks has struggled for consistent game time in the Premier League so far this season, although he seems to have turned a corner with recent back-to-back starts against Wolves and Leeds United.

Pritchard and Winks came through the Tottenham academy together, with the former eventually leaving in 2017/18 and the latter making the jump to the first team.

After spending one season at Bolton Wanderers in the Championship, Pritchard signed a contract with Accrington Stanley in League One and would certainly welcome the addition of Harry Winks to his current squad.

Pritchard managed an impressive 37 games last season for Accrington, notching up three goals. This season he already has two strikes in his opening nine fixtures (Wikipedia).

The former Spurs academy man admitted to The Sun this week that Winks always managed to outshine him at Hotspur Way.

“He was destined for the first-team. He is a great player and the best midfielder at Tottenham.

“Harry is not starting every game at the moment, so he would be a great addition for us!” 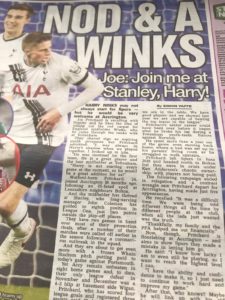 Ex-Spurs man wants ‘stale’ player to leave and become ‘one of...

‘I’m at an ambitious club’ – Spurs youngster prepared to wait...