L’Equipe (as relayed by Sport Witness) have revealed that Marseille midfielder Morgan Sanson would prefer a move to Tottenham Hotspur or Arsenal over West Ham United.

The same publication (as relayed by Foot Mercato) reported last month that super-agent Pini Zahavi, who was instrumental in bringing Jose Mourinho to North London (talkSPORT), had offered Tottenham the chance to sign Sanson.

The Frenchman has been one of the most consistent midfielders in Ligue 1 this campaign and is said to be looking for a new challenge.

It has now been reported that Marseille are keen to sell some of their players as they are desperate for a cash influx due to the financial hit they have taken as a result of the COVID-19 pandemic.

The report reveals that Andre Villas-Boas’ side are looking to sell Samson to Premier League clubs as they believe that is where they are going to get the most money.

It is claimed that West Ham and Crystal Palace have both expressed an interest in the 25-year-old.

However, Samson is not said to be keen on moving to either club as he is said to want to play Champions League football. The report suggests that a move to Tottenham would  appeal to the Marseille star. 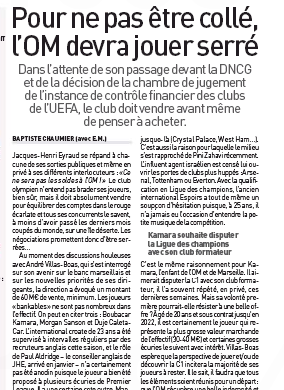 Samson is a tidy player and could be a decent addition for a lot of sides in the Premier League. However, I just don’t think we need a central midfielder of his profile this summer.

Having said that, there is no doubt that there are potentially some great deals to be had from Ligue 1 clubs this summer with clubs like Marseille and Lille seemingly ready to sell off their stars to raise some money.

Journalist claims Bale could return to Tottenham next summer on one...

‘I am ready’ – Tottenham star believes his summer decision has...