Home News Gallery: A look inside the new One Hotspur packs for the new... 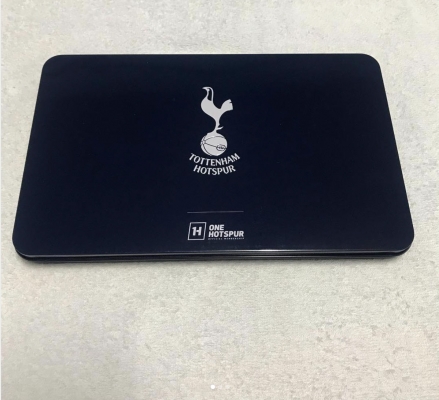 Tottenham Hotspur’s brand new stadium is inching towards completion, with the pitch and goal posts going down last week.

Latest pictures, for the first time since building began, show a stadium that looks ready to host a game of Premier League football.

The latest clue that an opening date is not far away is Tottenham sending out the season ticket holder gift packs for the new stadium.

These gift packs include a number of cool items for Spurs fans.

The gifts are stored in a commemorative tin which features a picture of the new stadium on the inner lid.

The tin contains a Spurs pin badge, commemorative limited edition stadium coin (with White Hart Lane on one side and the new ground on the other), and what appears to be a bracelet.

Also included is a leather wallet to hold your stadium card, and a pocket guide to the new stadium, as well as a Tottenham bag for life.

Finally, the club have included a key decorated with the club badge to commemorate the opening of the new ground. This key can be cut down to fit most Yale locks too.

Report: Club are being criticised for allowing player to join Spurs last summer

Report: Club are being criticised for allowing player to join Spurs...