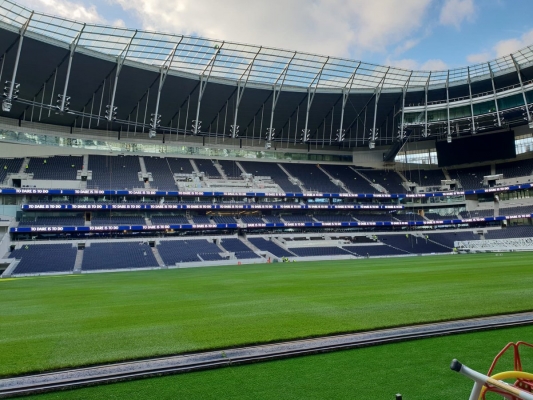 Tottenham are inching closer to final completion of their brand new 62,062 seat stadium as they add the finishing touches to the ground this week.

The turf arrived in a convoy of refrigerated vans last week and was laid onto three retractable trays, which when stored under the south stand will reveal the special NFL pitch beneath.

Yesterday saw the erection of the brand new goalposts at the south side of the stadium for a quick test before being removed around fifteen minutes later, and Harry Kane will be hoping to bang in a few goals through them in the second half of this season.

The golden cockerel has also arrived on site, and the iconic figure will take pride of place atop the finished roof in the coming weeks.

For the first time since building began, the latest pictures of the Spurs stadium show a near-completed ground, and it will give you goose bumps.

The seats are in place, the steps down to the pitch, the perfect green turf, the goal posts, everything is in place, and the opening date surely can’t be far into the future.