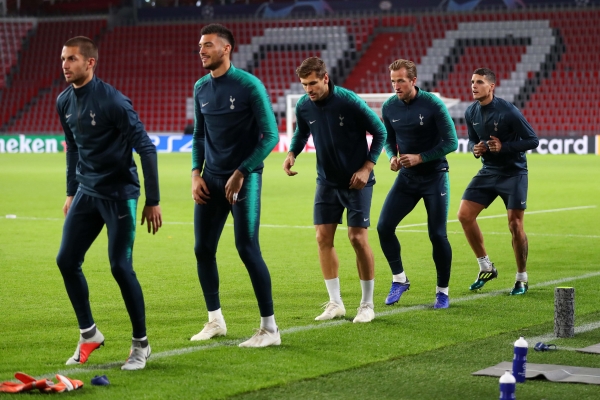 EINDHOVEN, NETHERLANDS - OCTOBER 23: Players warm up during a training session ahead of their UEFA Champions League Group B match against PSV at Philips Stadion on October 23, 2018 in Eindhoven, Netherlands. (Photo by Catherine Ivill/Getty Images)

The fixture holds huge significance for Mauricio Pochettino’s side after failing to pick up any points from the opening two Champions League matches against Inter Milan and Barcelona.

The Dutch outfit have also lost their first two encounters against the same opposition in what could be a crunch match to decide at the very least, who will go into the Europa League.

Jan Vertonghen, Dele Alli and Danny Rose were all left in England due to injury, while a late decision will be made on the fitness of Christian Eriksen.

Video: Chimbonda names three clubs who could sign Harry Kane and how Spurs can keep him