About to unwrap the box 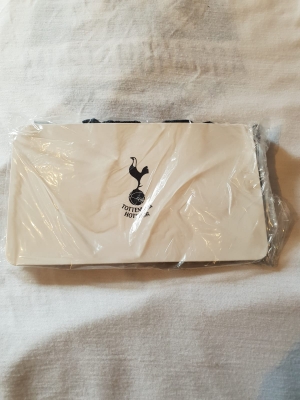 Tottenham fans have received the latest clue that the new stadium isn’t far away from an opening date this week.

Not only has the pitch now been marked, and the goal posts erected at either end once again, but the stadium access cards and membership packs have been sent out.

We take a closer look inside the season ticket holder packs.

Season ticket holders receive an array of goodies this year, including a commemorative coin featuring the old White Hart Lane on one side and the new stadium on the other.

There is also a key stamped with Tottenham images, said to represent the opening of the new ground, which can be cut down to fit most Yale locks.

A leather wallet is included to hold your season card, and a bag for life to carry assorted items into the stadium.

Finally, a bracelet, pin badge and pocket guide to the stadium make up the remainder of the gifts.

Opinion: Nuno’s first job at Spurs – And it involves a summer trophy