Tottenham Hotspur had been enjoying a 100 per cent win record under Jose Mourinho after their first three matches under the Special One, but that run has come to an end.

While Mourinho would have been dreaming of returning to Old Trafford with a win at the helm of Spurs, exactly one year after the Red Devils sacked him, it was not to be.

However, it can be argued that the manager was let down by the players on the pitch, as Mauricio Pochettino so often was at the start of the season.

It was a similar side to the ones Mourinho fielded in his first three matches, but the desire, high press, and determination was missing on a chilly night in Manchester.

Dele Alli stood at as perhaps the sole performer for Spurs, especially with his technically superb finish to make it 1-1.

Heung Min Son, who was uncharacteristically quiet, has assured fans that the team can do better (Standard): “I feel hurt and pain. Last night was very sad and I didn’t want to talk with anyone afterwards but I have to be positive. This kind of game against big teams like United or [Manchester] City, you want to win.

“It’s not time to be disappointed or sad because we have another game in three days. We have to carry on ­working hard. It’s important to look forward, so we can make it better.

“This is up to us and we have to be focused on this game. Every single team plays every three days so this can’t be an excuse.”

Video: “They don’t deserve this’ – Son reflects on key role in Spurs win 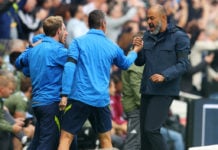