Harry Kane and Ryan Mason have taken to social media to send touching goodbye messages to Erik Lamela and to wish the Argentine luck in his new adventure in Spain.

Tottenham confirmed on Monday that Lamela had joined Sevilla as part of a deal to bring Brayn Gil to North London.

The 29-year-old’s departure signals the end of an era at Spurs, with the former Roma man being the last of the ‘magnificent seven’ bought with the Gareth Bale money in 2013.

Lamela thanked the Spurs fans for their support over the last eight years and insisted that the club will always have a special place in his heart.

While the attacking midfielder split opinion among the Tottenham faithful, many admitted that they were sad to see him go.

Kane and Mason have now also joined in the tributes, with the striker and the former midfielder admitting that it was a pleasure playing alongside ‘Coco’.

Coco it’s been a pleasure. Loved playing alongside you and all the best in Spain 🤝 pic.twitter.com/DcOcxyIw4X

A pleasure to play alongside and manage someone who always gave 100% for the club. All the best in Spain @ErikLamela pic.twitter.com/Gz0u0EQaIo

A heartfelt message from Serge Aurier to Erik Lamela after his departure from Spurs 😢 pic.twitter.com/0x5u8611Tf 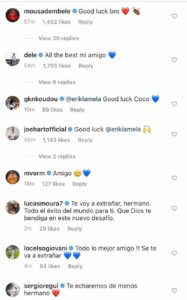 As someone who has always loved Lamela for his attitude and work rate, it has been heartening to see so many Spurs fans pay tribute to the Argentine. The 29-year-old deserves his status as a cult hero among sections of the fan base.

Report: Spurs could move for Roma star before the transfer window closes

Report: Spurs could face competition from Barcelona in the summer for Conte target

Report: Spurs could move for Roma star before the transfer window...

Former Spurs owner questions what Arsenal did after NLD was called...

Report: Spurs could face competition from Barcelona in the summer for...

Report: Spurs could move for Roma star before the transfer window...