With the recent appointment of Nuno Espirito Santo as the new Tottenham manager, I believe that Doherty could return back to the player we saw in the 18/19 season.

In that campaign, Doherty overlapped at right-wing-back for fun, getting into shooting and scoring positions consistently all season long.

He played a vital part in getting Wolves 7th and qualifying for the Europa League, playing all 38 games of the Premier League season.

This was Wolves’ first season back into the Premier League since 2011, making it even more impressive.

To put that into perspective, in 2011 Bolton and Sunderland were still in the top flight of English football!

You may be wondering why I am going into detail talking about this? The reason is that Nuno was behind getting Wolves such an amazing finish. He made the Irishman a fantastic right wing-back, which he now has the chance to become at Spurs.

If he utilises Doherty similarly to how he did at Wolves, going far up the pitch and whipping in crosses, then it will create an abundance of goals.

He usually opted for a low driven cross that would leave the man in the middle with a simple tap-in. And with Kane still at the club, very few of the chances Doherty creates will be wasted.

The 29-year-old even has the choice of whether he wants to stay relatively unpredictable and switch between high and low crosses as Kane has excellent aerial ability.

Moving on to the left side, Reguilon showed how great he was going forward this season so Nuno will be able to give the Spaniard similar instructions.

So with both Reguilon and Doherty going far up the pitch, putting in crosses, they will create huge trouble for the opposing full-backs.

Doherty will already be in the good books of his former coach, likely guaranteeing some starts to prove himself. A lack of quality right-backs at the club also adds to the likelihood of Doherty playing.

When he was asked about what Doherty needs to do, Nuno stated, “What he’s doing every day. Commit himself, work hard, the quality is there. I know him, he knows us. Take the best of him and this is what we will try.” (Football London)

In conclusion, if Doherty can revive the attacking prowess he had at Wolves, he just needs to improve his defending to become a quality wing-back.

And with the help of Nuno, that is entirely possible. 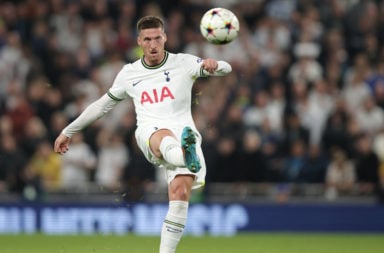 Report: Eight clubs have shown interest in Spurs defender but he won’t leave in January