Ambition from the hierarchy at Tottenham is an asset that most Spurs fans have been calling out for and their wishes have been granted after the appointment of Italian mastermind, Antonio Conte.

To understand what this means for the club, it is important to examine how the new manager will set up ahead of his first Premier League game against Everton at Goodison Park.

Conte opts to use the 3-5-2 formation which was so successful at his spells at Inter Milan and Chelsea where he was able to secure league titles for both clubs, therefore, it is expected that this specific style of play will be employed straight away at the Lane.

After an impressive start to the season, Hugo Lloris will most definitely keep his spot under the new boss and the keeper will hope that the strong, developed back three will provide more protection compared to the frail backline he was exposed to under Nuno Espirito Santo.

A key component to Conte’s achievements was the tactical alignment of his backline. Under his leadership, players like Milan Skriniar and Cesar Azpilicueta were able to flourish in defensive positions and it is hoped that new signing Cristian Romero can follow in their footsteps under such an experienced regime.

Choosing his first Premier League back three as Spurs manager will be tough as he will have to pick those players he has learnt to trust only a few days into the job. A backline of Romero, Dier and Sanchez looks the most probable ahead of the weekend’s game, but the inclusion of Japhet Tanganga should not be ruled out.

As a player who played in a three-man defence at Atalanta, the appointment of Conte would be music to the ears of Cristian Romero who excelled in an aggressive ball-playing role in Serie A last season.

One position which could spark some controversy is the right wing-back role with both Emerson Royal and Matt Doherty in contention to slot in out wide.

The latter, who performed very well in a similar system at his time at Wolves, could find his form again in Conte’s new system and may find himself back in the starting team sooner than he had anticipated.

As for new signing Emerson Royal, this attacking role isn’t new to him either with the Brazilian being utilised in this position at his time at Real Betis where he was able to command the right flank with ease.

Although Manuel Pellegrini opted to play a back four, Emerson Royal was free to charge down the wing to supply opportunities to cross into the box.

The wing-back pairing for this weekend’s game will most likely be Sergio Reguilon and Emerson Royal which Conte will hope can provide chances for the two strikers which have been minimal this season, to say the least.

Moving onto the midfield three, in particular the middle of the three, Conte will want a player who replicates the attributes of Marcelo Brozovic who he trusted throughout the whole of last season. A reliable suitor for this role would be Pierre Emile Hojbjerg.

However, Conte likes this position to be covered by a player who is able to take the ball from the defence and supply pinpoint balls into the charging wing-backs.

Perhaps a player like Tanguy Ndombele who possesses greater dribbling and passing skills would be preferred to the robust Hojbjerg who could subsequently filter into the other two midfield positions.

This new formation could hinder the growth of Oliver Skipp as the initial midfield three will most likely include Hojbjerg, Ndombele and Lo Celso, with Conte commonly playing only one conventional defensive-minded midfielder.

To complete Conte’s first eleven, the deployment of two strikers in his playing style means that a front two of Heung Min Son and Harry Kane will most definitely be present against Everton.

After a poor start of the season for Kane, he is said to be ‘very excited’ about the Conte appointment and is impressed with the club’s ambition. Under a manager who was able to get the best out of the strike force of Martinez and Lukaku, the connection between the two Spurs players could be revitalised and will more than likely return the pair to their best. 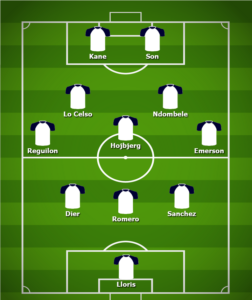