Tottenham and Leicester City go head to head this weekend in the Premier League, but we wanted to take a look at what would happen if the sides combined forces.

We have gone for Hugo Lloris between the sticks for his incredible form over the past year.

In the central defensive duo, we have gone for the experience of Toby Alderweireld and the impressive Caglar Soyuncu.

On the left side of defence, we have opted for the combined defensive and offensive capabilities of Timothy Castagne, who can play on the left or right. On the right side, Serge Aurier gets the nod for his impressive start to the season.

Pierre-Emile Hojbjerg would walk into most Premier League teams at the moment, so he partners the beautiful all-rounder, Youri Tielemans in midfield.

Tanguy Ndombele just edges the creative midfield spot, although Lo Celso and Maddison could easily rotate in there too.

Up front, the preferred three simple has to be Harry Kane, Heung-min Son and Jamie Vardy. Goals, goals, goals! 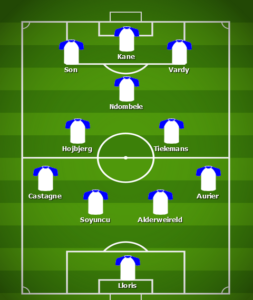