Home Spurs News Opinion: The Spurs XI we want to see against Villa after that...
1
SHARES
ShareTweet

Tottenham Hotspur have a point to prove against Aston Villa this weekend as they seek to put the shocking defeats to Arsenal and Dinamo Zagreb behind them.

In our minds, there is only one starting XI that we want to see out there on Sunday:

Hugo Lloris lines up in goal as usual, with the recent defensive partnership of Toby Alderweireld and Davinson Sanchez remaining as it has definitely been the most solid.

Sergio Reguilon comes back in as the best full-back at the club, while on the right-side Tanganga gets a chance due to the recent incompetence from Aurier and Doherty.

Pierre-Emile Hojbjerg and Tanguy Ndombele simply have no competition for these two central midfield slots, at least until Lo Celso gets back to full fitness.

Lucas Moura has also been a rare shining light in recent weeks in his new number 10 role, which we believe he should continue to operate in.

Gareth Bale and Harry Kane walk into the team of late and, the dreamers that we are, we have put Heung-min Son on the left after he makes an early recovery this week. Let’s all keep our fingers crossed! 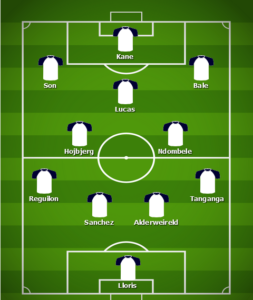