As the famous song goes, ‘you don’t know what you’ve got ‘til it’s gone.’

This felt particularly pertinent to Tottenham fans on Sunday, watching as the team struggled to overcome League One Morecambe in the FA Cup third round. Some may have been casting their mind back a few years, reminiscing about better days.

This may sound overdramatic. But, despite the steady progress since Antonio Conte’s arrival, there have been signs in recent weeks of just how much work is needed with this Tottenham re-build.

Following the defeat to Chelsea, Conte himself said ‘I think in the last years the level of Tottenham has dropped.’

It was a different story when Conte first arrived in England ahead of the 2016/17 season. In fact, last week’s defeat was almost exactly five years to the day that Tottenham beat Conte’s Chelsea 2-0 in the Premier League – a result that was part of an unbeaten home record in the final season at White Hart Lane.

Although ultimately finishing second behind Chelsea that season, Tottenham were competing with the top teams, with an exciting brand of football.

It is clear those better days have ‘gone’. Off the pitch, the club has progressed in the past five years. On the pitch, there has been a gradual decline. To fully appreciate the scale of the re-build, it helps to compare the team from that night against now.

Verdict: The goalkeeper has remained the same, but Hugo Lloris is now 35 years old. Assuming he signs an extension to his current deal, Tottenham will need to find a long-term successor in the next year or two.

Eric Dier, Toby Alderweireld and Jan Vertonghen formed the back three on the 4th January 2017. The latter two were in their prime at 27 and 29 respectively. Dier was younger at 22 but coming off the back of a superb first two seasons. The defensive stats underlined their dominant performances with just 26 goals conceded that season.

Back to the present. If everyone is available, the preferred back three would be Christian Romero, Dier and Ben Davies. Romero is young and new to the league, but the early signs are promising.

Dier has had a good season so far, but time will tell whether he continues to improve and consistently produce high-level performances. Davies has also shown improvement and reliability, but he feels like a stopgap in that position.

Verdict: Although there are backups in the squad, Japhet Tanganga and Joe Rodon are both young and could benefit from loan moves. And in Davinson Sanchez it feels as though he will never quite reach his full potential. Therefore, Tottenham should be looking for a ready-made centre back, ideally left-footed, to replace Davies in the starting 11.

Tottenham were seemingly spoilt for choice with his understudy, Kieran Trippier, also contributing 5 assists. On the other wing, Rose was equally effective, providing 3 assists and 2 goals.

The decline in this department has been severe, especially when you compare Tottenham’s current wing-backs with those of Liverpool, Chelsea and Manchester City. In particular, Emerson Royal has 1 assist in 14 league games this season, with questionable distribution in the final third.

After the Watford game, Conte stated that ‘when the ball arrives there [in the wing-back position], we must be more effective.’ Reguilon isn’t exempt from this statement. However, his 3 assists and 1 goal signal a more effective attacking output.

Verdict: At 22, Royal needs time to adapt to his new environment. The alternative option, Matt Doherty, has not worked out, despite how effective he was in that position for Wolves. Therefore, Doherty should be moved on and a replacement brought in. Someone that can be used instead of, or at least rotated with, Royal.

There are clear signs that Reguilon has the ability to adapt to the wing-back role. Therefore, he should be given time to grow into the position, with Ryan Sessegnon providing competition.

From the 2017 midfield three, it is Mousa Dembele and Christian Eriksen who best highlight the disparity between that team and the current team.

Eriksen’s creativity has not been replaced since his departure in January 2020. Tanguy Ndombele and Giovanni Lo Celso were considered to be replacements, but form and injuries, respectively, have hampered their Tottenham careers.

The loss of Dembele was perhaps of greater significance. Much more than just a defensive midfield player, he was strong, could break up play, but also had great technique, the ability to glide past players and progress the team up the pitch. A “genius” according to ex-manager, Mauricio Pochettino.

Verdict: Ndombele has now had ample chances under several managers. Irrespective of his reaction on Sunday, which didn’t help his cause, Tottenham should look to offload him. On the other hand, Lo Celso should be afforded the opportunity, at least until the summer, to prove his fitness and fill one of the voids below.

Whether Lo Celso or someone new, Tottenham need a creative midfielder that can be the missing link between midfield and the forwards – especially if playing in a 3-5-2 formation.

If 3-4-3 is preferred then a more progressive holding midfielder is needed, in the style of Dembele. Pierre-Emile Hojbjerg, Oliver Skipp and Harry Winks are all capable footballers but are not ball carriers who will drive the team forwards.

The only area of the pitch which hasn’t regressed. Dele Alli was scintillating back then, scoring twice in that 2-0 victory over Chelsea. However, things move on and, whereas Alli has faded, Tottenham have other good options going forward with Son Heung-min, Lucas Moura and the potential of Bryan Gil.

Verdict: Although not the most pressing area to be addressed, another striker would be a useful addition. Someone who can take the burden off Harry Kane and provide an alternative option. 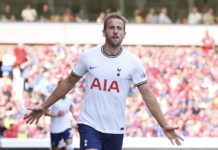