Following a game that left a lot to be desired against Crystal Palace, Nuno’s tactical set-up has come under fire.

The Portuguese coach opted for a 4-3-3 set up against the Eagles, however, it became apparent early on that this formation that had served so well for the first three games of the season, was not going to be successful with this depleted side.

However, under my analysis of the current side, I spotted that Nuno’s team could also fit a 5-2-3 or 5-3-2 set up, due to Tottenham’s quantity of attacking fullbacks.

This was especially noticeable after left-back, Sergio Reguilon, enjoyed an impressive start to the season, and his ability to bomb down the wing after Bergwijn or Heung-Min Son move inside and create space has been particularly eye-catching.

This idea of a five at the back does make sense for a wide variety of reasons, it would utilise our attacking fullbacks and it also could allow for Tanganga to gain experience alongside a more forgiving two partners in the middle.

The use of the five at the back formation could also, if played in the right way, be a step towards fulfilling Spurs’ fans desire for attacking football. The team would look more like a 3-5-2 or 3-4-3 in possession.

A reason why it could be a clever idea to change the formations now is that a switch early on in Nuno’s reign could mean that players are able to adapt easily due to them not being fully established into a certain system, and the team shape still seems mouldable.

However, as with everything within football, this formation switch has its downsides.

A notable factor would be that the Portuguese manager has previously used this five at the back formation at his former side Wolverhampton Wanders, towards the latter and poorer stages of his stint at the midlands club.

Those last few months under Nuno with this system would certainly be something his new employers will be keen to steer well clear of.

It could also be argued however that this tactical system that has been deployed thus far this season doesn’t necessarily need changing immediately, after a successful three games at the start of the season with the 4-3-3.

The question lies within the recent Crystal Place match and whether it can be written off as a combination of a weakened Tottenham side and a poor match of decision making, from the players and manager.

Therefore, it seems necessary to look back into the archives of those initial three Premier League games with the current system to see whether or not this formation is sustainable.

The Tottenham team so far has lined up as a 4-3-3 out of possession of the ball, and swiftly shifted to a familiar 4-2-3-1 formation, with Dele Alli acting as the player who can shift from that midfielder role to more of a central attacking midfielder.

This formation saw out three wins, with three goals being scored within those games. To look at the statistics, Spurs created 3.62 xG (expected goals) which placed them  11th on the xG table after the three games, not ideal for a team that won all three.

However, the even more concerning stat is the lack of big chances created, with Spurs only generating one ‘big chance’ out of their four opening games. Which places them joint last comparative to the rest of the Premier League.

This is clearly pointing to the fact that this formation isn’t allowing enough attacking chances to be established and that Tottenham are clearly lacking a creative spark within the team.

Manager Nuno Espirito Santo has even admitted to this creativity absence as when he was asked about the lack of creativity he admitted ‘it is a big concern’.

However, on the player front, our hands seem to be tied with the transfer window now being closed, an agonising window that saw Spurs fail to purchase a creative midfielder.

Fortunately, the deadline day meant that talented midfielder, Tanguy Ndombele, stayed at the club, with rumours now circulating that he is ready to fight for his place in the first-team position, which does give hope to Tottenham’s creative drought.

After impressive spells of form last season Ndombele gave Spurs fans hope that he could finally be their man to be able to kickstart their attacks, with his unique ability to carry the ball forwards and form an intricate pass.

Now that there seems to be consideration of Ndombele returning to the side by Nuno, it could force this change in formation. With a possible 5-3-2 out of possession seeing sensible, meaning the team would switch to a 3-5-2 in possession, depending on how far Skipp or Hojbjerg are told to drop.

This would offer the Reguilon and Emerson a licence to bomb forward, as well as Ndombele being the man to carry the ball up the pitch and even thread through either the on-running full-backs or Son and Kane up front.

The concepts of these formations as a line-up can be seen below: 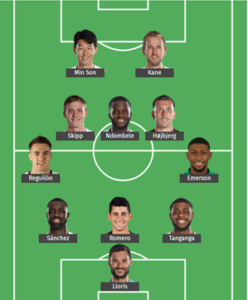 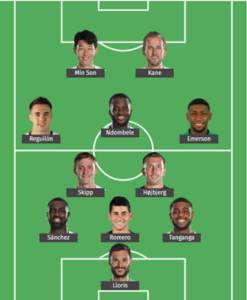 It remains to be seen whether Nuno will take the leap of faith against such dangerous opponents as Chelsea and switch up his team shape, or if he will hold his nerve and stay with his current team set-up. Either way, the coming months as a Spurs fan will be intriguing and could be season-defining.