Let’s be honest, it is impossibly difficult to predict the first starting XI for a new manager but we wanted to give it a go and believe that Mason may make a few changes.

We believe that the Spurs academy graduate will name Hugo Lloris between the sticks, with a central defensive duo of Toby Alderweireld and Joe Rodon.

At left-back, Sergio Reguilon continues to play every game due to the injury to Ben Davies, while Japhet Tanganga gets the nod at right-back.

Lucas Moura and Gareth Bale back up an attacking trio, all able to chop and change positions with one another, while Heung-min Son leads the line in the absence of Harry Kane. 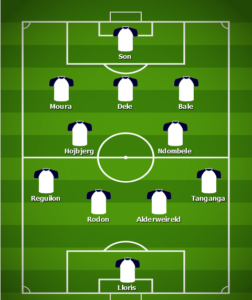