Tottenham Hotspur face one of the toughest fixtures in the Premier League at the moment this weekend, an away trip to Brighton.

We would love to see Conte switch things up and bulk out the midfield a little against a fellow wing-back system that loves to dictate possession.

We hope to see Hugo Lloris between the sticks, with an unchanged back three of Clement Lenglet, Eric Dier, and Cristian Romero. Despite Dier picking up a knock to the knee against Frankfurt, The Athletic report he is fit to play.

With Emerson Royal banned and Doherty and Spence having a severe lack of minutes, we expect to see Conte use Ivan Perisic at right-wing-back again, with Ryan Sessegnon at left-wing-back.

In midfield, the normal duo of Pierre-Emile Hojbjerg and Rodrigo Bentancur line up alongside former Brighton man Yves Bissouma who is in dire need of a start.

Up front, Heung-min Son is back in his favoured position right on the shoulder, with Harry Kane given the freedom to roam and pick out balls over the top.

However, if Conte does stick with a 3-4-3, we would expect Bissouma to drop out for Richarlison. 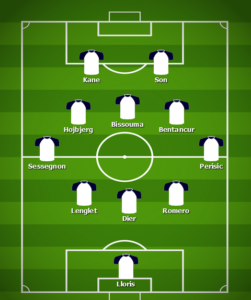