Tottenham Hotspur welcome Crystal Palace to North London this weekend in the Premier League as they look to record three consecutive wins in the competition.

We believe that Hugo Lloris will start between the sticks for the Lilywhites, with Toby Alderweireld rested and Eric Dier brought into the centre of defence.

Davinson Sanchez retains his spot after an improved run of form, while both Sergio Reguilon and Serge Aurier return to the line-up after missing the Fulham game.

Pierre-Emile Hojbjerg continues to be an everpresent in the centre of the pitch, partnered once again by Tanguy Ndombele.

Dele Alli and Gareth Bale both drop to the bench as they continue to build form and fitness, with Erik Lamela and Lucas Moura coming back into the XI.

As usual, Harry Kane and Heung-min Son lead the attacking line for Jose Mourinho’s side as they continue to climb towards those top four spots. 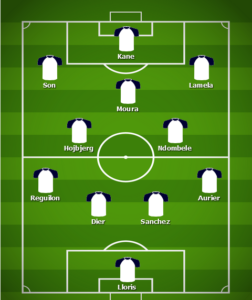 Report: Joe Lewis has been lining up Spurs sale – £800m deal fell through

Opinion: Playing out the string

Lloris insists Spurs are not ‘far away’ from best in league...