Tottenham Hotspur face a tough away trip to Croatia this week as they take on Dinamo Zagreb in the second leg of their Europa League knockout tie.

Spurs go into the game two goals to the good thanks to their win in North London last week but still have plenty to do to get over the line.

We believe that Jose Mourinho will trust his side enough to make changes in Croatia, with Joe Hart coming in between the sticks to replace Hugo Lloris.

Serge Aurier starts at right-back after sitting out the recent North London Derby, while Ben Davies lines up at left-back. In the centre of defence, Eric Dier and Davinson Sanchez are given the nod.

In the engine room, Harry Winks and Moussa Sissoko take over from Tanguy Ndombele and Pierre-Emile Hojbjerg, the latter of whom is banned due to yellow card accumulation.

Dele Alli is given another chance at number ten, with Erik Lamela forgiven for his red card at the weekend and the in-form Lucas Moura also given the nod. Harry Kane starts up front. 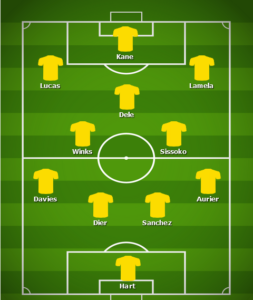