Tottenham Hotspur face already-relegated Sheffield United this weekend in the Premier League as they continue to chase the Champions League spots.

We believe that Ryan Mason will name Hugo Lloris between the sticks for the Lilywhites, sticking with the same back four that faced Man City in the League Cup final.

That means Sergio Reguilon at left-back, Eric Dier and Toby Alderweireld in the middle and Serge Aurier on the right.

In the centre of midfield, Tanguy Ndombele is recalled to the team as Harry Winks drops down to the bench again. Pierre-Emile Hojbjerg remains the main defensive option in the middle of the park, as usual.

Lucas Moura takes up the number ten role for the day, with Gareth Bale coming back into the side after being benched against Man City.

Heung-min Son and Harry Kane lead the line as normal and will surely be hoping to hit a few goals past the relegated opposition. 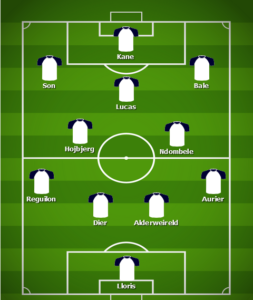 Opinion: Why Steve Hitchen is the biggest problem at Spurs

Opinion: Why Oliver Glasner is a perfect fit for Tottenham

Opinion: Why Steve Hitchen is the biggest problem at Spurs