Tottenham Hotspur may have earned another Premier League victory at the weekend but Thursday will pose a very different task in the Europa Conference League.

Spurs travel to the Netherlands to face Vitesse away and they may need a win to remain top of Group G.

We believe that Pierluigi Gollini will be given the nod between the sticks, with Hugo Lloris handed a rest for the weekend against West Ham United.

At the back, it’s all changes for the Lilywhites as Joe Rodon and Davinson Sanchez replace Eric Dier and Cristian Romero. At right-back, Japhet Tanganga comes in while Ben Davies fills in for Sergio Reguilon at left-back.

In the engine room, Oliver Skipp is handed a deserved rest as Harry Winks comes back in, while Pierre-Emile Hojbjerg retains his place in the XI.

Dele Alli is handed a chance to impress in the number 10 role, with Steven Bergwijn back from injury on the left and Giovani Lo Celso operating off the right. Dane Scarlett leads the line with Harry Kane and Heung-min Son on the bench. 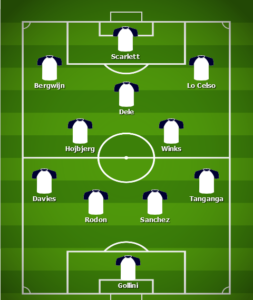