Tottenham Hotspur take on Arsenal in the first North London Derby of this season this weekend at the Emirates.

We believe that Hugo Lloris will retain his spot between the sticks after another impressive start to the Premier League season.

We also think that Nuno will return to the back four he favoured at the very start of the campaign, with Sergio Reguilon on the left and Japhet Tanganga on the right. The latter should be more than up for a North London Derby as an academy lad.

In the centre of defence, Eric Dier lines up on the left and Davinson Sanchez returns to partner him, with Cristian Romero dropping down to the bench for now.

In central midfield, we believe Nuno will drop Skipp to the bench and push for a more adventurous trio of Dele Alli, Pierre-Emile Hojbjerg and Tanguy Ndombele.

Up front, Harry Kane will have Heung-min Son on one side and the returning Lucas Moura on the other, with Bryan Gil just missing out. 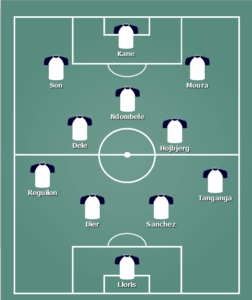