Tottenham Hotspur take on Leeds United in North London this weekend as Antonio Conte will be looking to secure his first Premier League win in charge.

We believe that Hugo Lloris will take his place between the sticks as normal, with Sergio Reguilon and Emerson Royal lining up as the wing-backs. Although, we would not be surprised to see Matt Doherty in there instead.

In the centre of defence, Japhet Tanganga comes in to replace the injured Cristian Romero due to his experience at both centre-back and right-back, while Eric Dier and Ben Davies retain their spots.

Pierre-Emile Hojbjerg passes a late fitness test to be included, while Harry Winks replaces Oliver Skipp in the line-up, with the young midfielder banned for the match.

Up front, Harry Kane, Heung-min Son and Lucas Moura remain, although Steven Bergwijn will be knocking on the door of a place and Tanguy Ndombele is an option if Conte swaps to a 3-4-1-2 formation. 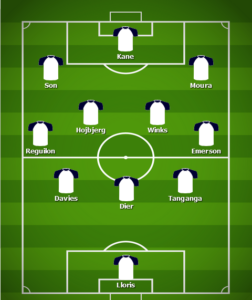 Report reveals where Nuno’s next job is likely to be after being...