Tottenham Hotspur have no time to feel sorry for themselves this week after that disappointing defeat to Liverpool on Wednesday, as they face a tough clash against Leicester City at the weekend.

We believe that Hugo Lloris will start between the sticks, with one change coming in the back four as Sergio Reguilon replaces Ben Davies at left-back.

The usual trio of Eric Dier, Toby Alderweireld and Serge Aurier make up the rest of the defensive line for Spurs.

As usual, Pierre-Emile Hojbjerg and Moussa Sissoko partner up in the engine room, despite Sissoko’s brief and unsuccessful spell at right-mid against Liverpool.

Tanguy Ndombele comes back into the side to replace Giovani Lo Celso, with Mourinho yet to trust playing both in big games.

Up front, Kane and Son lead the line, with Steven Bergwijn retaining his place despite criticism online for his misses against Liverpool. Hopefully, Mourinho will make a statement that he trusts the Dutchman after such an unwarranted negative reaction. 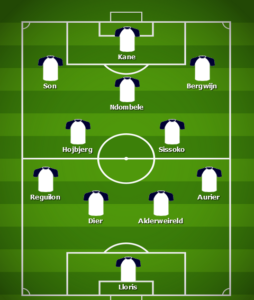 Report: The main stumbling block which could stop ‘keen’ Eriksen from Spurs return