Home News Predicted Tottenham XI to take on Marine in the FA Cup –...

Tottenham Hotspur take on Marine in the FA Cup this weekend and we expect Jose Mourinho to make wholesale changes for the clash against the non-league side.

We predict that Joe Hart will be named between the sticks to give Hugo Lloris a much-needed rest.

Ben Davies returns at left-back, while Davinson Sanchez retains his place to partner Toby Alderweireld in the heart of defence. Japhet Tanganga lines up for a rare start at right-back.

Pierre-Emile Hojbjerg and Harry Winks are named in the centre of the pitch, with Moussa Sissoko handed a rest after his supreme efforts against Brentford.

Dele Alli has struggled for consistent minutes this season but gets a chance to impress from the start against Marine.

Carlos Vinicius leads the line in order to give Harry Kane a rest, while Heung-min Son is also only named among the substitutes.

Steven Bergwijn and Lucas Moura start on the left and right wings respectively, with both of them looking to prove themselves as worthy first-team choices for Mourinho.

What changes would you make to this side? 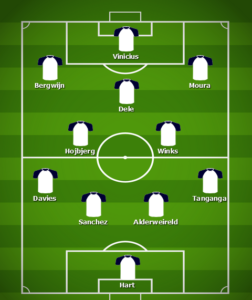 Report: Daniel Levy blocked a 50% sale of Tottenham worth £800m

Report: French starlet rumoured to be on Spurs’ radar could be available this summer

Scout confident player will ‘score goals’ after his performance at Spurs...