Tottenham Hotspur face a different kind of match this week as they travel to play Wolfsberger in the first leg of their knockout Europa League tie on Thursday.

We believe that Joe Hart will come in to replace Hugo Lloris on the night, with Eric Dier and Toby Alderweireld lining up in the centre of defence.

Serge Aurier returns at right-back while Japhet Tanganga covers at left-back to give Ben Davies a much-needed rest.

Gareth Bale lines up in a more central role after the bright cameo in that area against Man City at the weekend.

Erik Lamela players off the right while Steven Bergwijn plays off the left, with Carlos Vinicius leading the line for Tottenham.

Harry Kane and Heung-min Son are rested by remain on the bench if needed by Jose Mourinho. 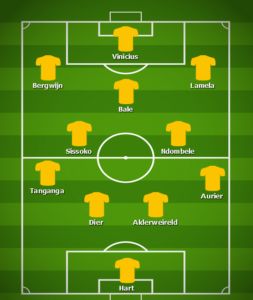 Opinion: Looking at what kind of legacy Hugo Lloris will leave at Spurs

Director claims if anyone can sign CL winner for Spurs, it’s Daniel Levy

Mourinho says Ndombele ‘second to nobody’ but star still frustrates him

Opinion: Looking at what kind of legacy Hugo Lloris will leave...