Danny Mills has insisted that Sam Johnstone is not going to keep Hugo Lloris out of Tottenham’s starting eleven amidst reports linking the West Brom goalkeeper with a move to North London.

Reports over recent weeks have indicated that Spurs are confident of winning the race for Johnstone, whose contract at the Hawthorns runs out in the summer (The Sun).

The ever-reliable Alasdair Gold even said in his latest YouTube video that the England goalkeeper is likely to replace Pierluigi Gollini as Lloris’ understudy, with Spurs not expected to take up the option to sign the Italian permanently.

Football Insider reported last week Johnstone has told his friends that he is keen on a switch to Tottenham and believes he could eventually succeed Lloris as the club’s number one.

However, Mills has questioned why Antonio Conte’s men are not making a move for a goalkeeper who would be an upgrade over Lloris and are instead settling for a clear backup.

When asked about Tottenham’s rumoured move for Johnstone, the former Leeds defender told Football Insider: “It’s a difficult one. You’ve got to bring in better than what you’ve got and is he better than Hugo Lloris? I doubt it, would be the answer to that.

“Lloris isn’t perfect but I’m not convinced Johnstone is a better option. Do you look at it and go ‘That’s an upgrade’.

“Look at Arsenal, a lot of people saw Ramsdale over Leno as an upgrade. He had played well for quite some time and Leno is not as good as Lloris, I would say.

“It will be that juggling act of the home-grown player rule and who do you use for that. First and foremost you have to improve your first XI. There’s no point bringing in players who are not going to do that.”

There are not a lot of goalkeepers in the world who would be an upgrade on Lloris. There is no reason for us to search for one just yet as the Frenchman has shown this season that he is still reliable. Johnstone is as good a backup as we can get, given that the 29-year-old is homegrown, has Premier League experience and is available on a free transfer. 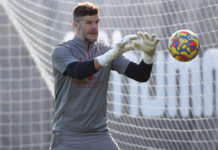