Trabzonspor goalkeeper Ugurcan Cakir is said to be a top target for Tottenham Hotspur this summer according to reports from Turkey.

Compared to the other goalkeeping options that Tottenham have been linked with like Andre Onana (The Sun) and Thomas Strakosha (Tuttomercatoweb), Cakir is arguably a relative unknown for English football fans.

The 24-year-old has been in terrific form for Trabzonspor and has been backed to go right to the top.

His impressive displays have reportedly seen him attract the attention of several clubs across Europe with the likes of Tottenham, Liverpool, Lazio, Monaco, Brighton and Newcastle all reportedly sending their scouts to watch the 24-year-old in action this season (Fotospor).

Tottenham have reportedly already had an offer of £18million turned down by Trabzonspor for the Turkish international (Karadeniz Gazete).

Fotomac now claum (as relayed by Sport Witness) that Mourinho is keen on signing a new goalkeeper this summer, and Cakir is currently topping his list.

The report suggests that the North Londoners view the Turkish international as the most realistic target this summer as he is unlikely to cost as much as the other shot-stoppers on the club’s wishlist. 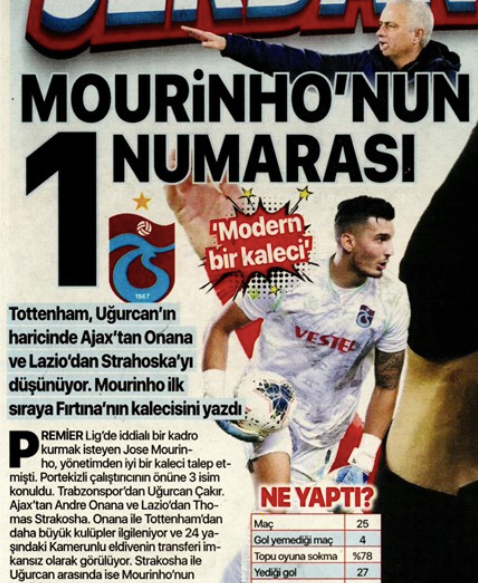 The Turkish press certainly isn’t very reliable when it comes to transfer news and so we should to take this with a pinch of salt. While I can understand why the club would be looking for a long-term replacement for Hugo Lloris, I am not convinced we are going to go all out to sign a future number one this summer, given the financial constraints involved.

‘Ndombele has finally been freed’ – Some fans react to the...

‘Worst kit in our history’ – Some Spurs fans react to...

Alasdair Gold’s Spurs sources reveal why Nuno has been ‘brooding’ this...

‘Ndombele has finally been freed’ – Some fans react to the...