Home News Report: January signing realises he has to prove himself to Jose Mourinho
5
SHARES
ShareTweet

Steven Bergwijn enjoyed a dream start to life at Tottenham Hotspur in January when he scored a stunning volley in front of a full capacity stadium in North London to to help the club to a 2-0 victory against Manchester City,

The winger made the switch from PSV Eindhoven and penned a five year deal with Jose Mourinho’s side, having scored 31 goals in 146 appearances for the Dutch giants (Sky Sports).

Bergwijn has experienced a more difficult time this season to hold down a regular place in Jose Mourinho’s side having failed to make the match day squad for three of Tottenham’s last four Premier League encounters (transfermarkt).

Dutch news outlet De Telegraaf (via Sport Witness) claimed in Friday’s print edition that the 23-year-old is fully aware that he needs to prove his worth to the Spurs head coach and is under no illusions of the task ahead of him. 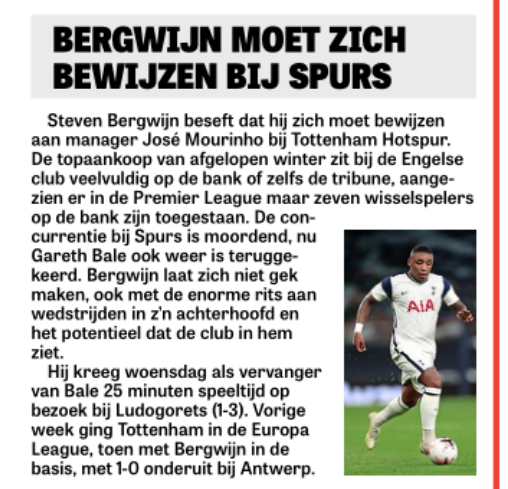 Journalist claims Spurs could look to land 23-year-old defender for around £12.7m

Journalist claims Spurs could look to land 23-year-old defender for around...