Marcus Edwards was one of a number of summer departures from Tottenham Hotspur.

The 21-year-old left North London after making just one senior appearance for the club which came in the EFL Cup against Gillingham in 2016.

Edwards was once considered to be one of the brightest talents within the club’s academy which led to former boss Mauricio Pochettino claiming that he possesed the same qualities as Lionel Messi (ESPN).

The midfielder made somewhat of an unfamilar move when he joined Portuguese Primeira Liga side Victoria. 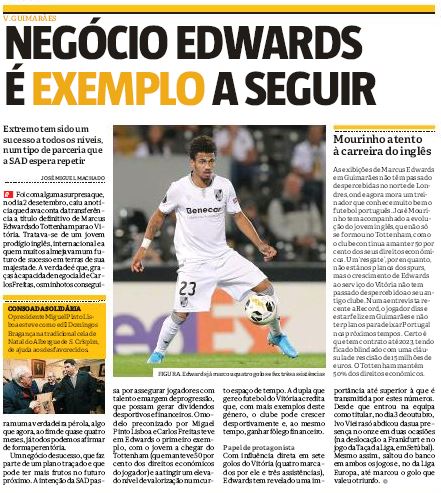 Tottenham did not receive a transfer fee when they allowed Edwards to make the move to Portugal but instead agreed to receive 50 per cent of a future sale.

It is reported that an Edwards return to Tottenham is not on the radar for Mourinho just yet but is instead just keeping his eye on the situation (SportWitness).

Edwards has made 17 appearances for Vitoria in all competitions this season, whilst also delivering four assists and scoring four goals, including one against Arsenal in the Europa League (transfermarkt).