The Evening Standard have reported that Tottenham face an ‘uphill struggle’ to sign Luis Diaz from Porto before the January transfer window slams shut.

The report claims that Fabio Paratici is spearheading the project to land Diaz in the next five days, but Tottenham would have to ‘significantly up their bid’ in order to sign him.

With Porto challenging for the league title and the Portuguese club only owning 80 per cent of Diaz’s registration, the deal is complicated, to say the least.

Pedro Sepulveda reported yesterday that Tottenham has lodged an opening offer of €45m (£37.6m) plus bonuses to Porto for the winger.

However, the Lilywhites have allegedly been told to up that bid if they want to sign him, as Diaz’s release clause sits at £66m (The Guardian).

There could also be another problem for Spurs, with Record reporting that Diaz himself is not that keen on a move to North London as he thinks a more lucrative transfer could present itself in the summer. 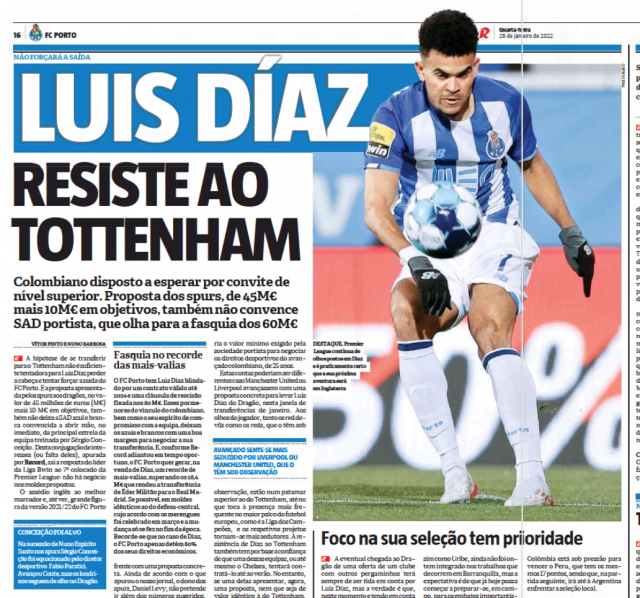 This seems far too complicated to get done in the next five days. Spurs should concentrate on getting Adama Traore and a central midfielder done in the next 48 hours, then move on to a late attempt for a forward.

Report: European club are about to sign Dele Alli on loan with option to buy

Report: Tottenham have submitted a bid for Man Utd starlet who is up for sale

Report: European club are about to sign Dele Alli on loan...

Journalist explains technicality may have allowed Romero to escape punishment for...

Fabrizio Romano claims Spurs are ‘unlikely’ to win the race for...

Report: Tottenham have submitted a bid for Man Utd starlet who...