According to a report from Gazzetta dello Sport, Tottenham Hotspur could sign Patrik Schick to replace Harry Kane this summer.

Kane’s future continues to be the subject of much speculation but Tottenham’s managing director of football, Fabio Paratici has insisted this week that the club are determined to hold on to their star striker.

If the 27-year-old is sold, the North Londoners would likely have to invest significantly in the transfer market to replace his attacking output.

Some sources have suggested that Spurs could snap up Fiorentina’s Dusan Vlahovic if they lose the England captain.

However, Gazzetta dello Sport have now claimed that Spurs view Schick as the ideal replacement for Kane.

The report asserts that the Czech international, who is the joint-leading goalscorer at the European Championships with five strikes, is valued at around €40m (£34.2m) by Bayer Leverkusen.

It is asserted that Everton are also in the running for Schick, with the Toffees set to move for the 25-year-old if they lose Dominic Calvert-Lewin. 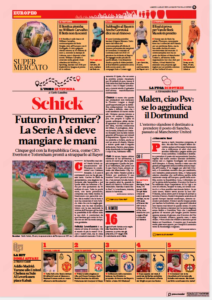 Even though Schick’s career has not hit the heights that it initially promised, the Leverkusen striker can certainly be a handful for opposition defences when he is in form. I believe he would be an astute signing as a backup to Kane. However, he is not of the quality required to replace the England captain if he is sold.

Report: Spurs target absent from training as he attempts to force move

Report: Spurs target absent from training as he attempts to force...

La Liga expert gives verdict on Kounde and whether he could...