The first NFL games held at the Tottenham Hotspur Stadium are approaching fast. The first game is Chicago Bears vs Oakland Raiders on October 6th, just under a month away. The club has today announced that they will be doing special NFL guided tours of the stadium for fans.

Fans will be taken through all the different parts of the stadium like the locker rooms and the press areas. They will also be able to see real equipment such as the players’ jerseys and pads.

On specific dates, the fans will also be able to see the special artificial NFL turf pitch. This will be the first use of the ground-breaking artificial turf so it will be interesting to see how well it works.

This would be a fantastic experience for UK based NFL fans as they can tour a proper stadium without having to travel to America. Hopefully, these matches will also lead to the first overseas NFL franchise, which could bring in more money for Spurs.

This is a nice touch from Spurs to give UK based NFL fans the ability to have the full experience. The NFL games at the new stadium are a fantastic opportunity and it looks like Daniel Levy has pulled off another masterclass. If we get a London based NFL franchise then that could bring in some serious money for the club! 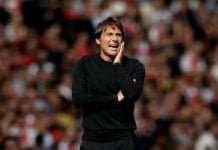